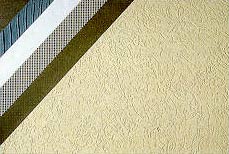 The problems facing EIFS homeowners are no different than those facing owners of brick, vinyl, or wood-sided homes. All homes, no matter how they are clad, experience difficulties from poor construction practices, noncomplying building components, and irresponsible integration of dissimilar building interfaces. Although problems occur in all types of buildings, no matter what their exterior, EIFS structures manifest these construction deficiencies earlier. The problems and the damage do not differ a great deal but are generally only recognized in homes clad in barrier EIFS systems as these structures have come under close scrutiny.

EIFS or Exterior Insulation and Finish Systems, is commonly referred to as "synthetic stucco." EIFS systems are made up of as many as five layers (listed in order from the outside layer in): a decorative exterior finish; a reinforcing mesh to protect the system; an insulator which is normally Expanded Polystyrene (EPS) and an adhesive substance that binds the insulator to the building; and a substrate to which the insulator is attached. EIFS is not designed to rid the system of excessive amounts of moisture. EIFS is a barrier system that clads or envelops the base wood structure of a home, engineered to be impenetrable by water and to "breathe out" or evaporate moisture. EIFS is not an open system as in brick or vinyl homes, which are designed to drain water as it enters. Recently there has been some concern regarding other types of stucco systems. In the Minneapolis, Minnesota area there have been a number of issues which are typically related to EIFS systems showing up in more traditional stucco systems. Further investigative probing may be recommended on homes both in this area and others to determine to what extent, if any, these systems have been affected, as in the case of EIFS systems.

Why does water penetrate EIFS?

Water penetrates the EIFS system because builders and contractors sometimes ignore code requirements for prevention and control of moisture damage in the residential home construction industry. Builders can ignore manufacturers' specifications as well, installing EIFS systems on flat surfaces, failing to create expansion joints, and most important, failing to properly flash around windows, doors, and roof lines. According to Mike Bercutt of Opus Homes, Inc. In an issue of Custom Builder, "Builders are innovative... we apply EIFS on horizontal surfaces and ignore expansion joints because they are ugly..." Proper flashing and sealant around windows or doors fails to protect a major point of water penetration into all homes, not only those clad in an EIFS system. Is this innovative or just plain irresponsible? According to CABO Code § 703.8 (adopted by most Southeastern jurisdictions as THE building Code), FLASHING "shall be provided at top and sides of all exterior windows and door openings in such manner as to be waterproof." According to a 1992 Clemson study on moisture damage to all types of homes including EIFS, in the Southeast, 18% of homes tested were found to have superstructure damage from moisture invasion at doors and windows which were improperly sealed. A study conducted on 100 EIFS homes in the Wilmington, NC area showed that 18% of 2,751 windows tested required an average replacement of 16 square feet of substrate. The locations of the damage to EIFS and non-EIFS homes correspond. These figures confirm the need to use quality windows, to properly seal points of penetration, and to conform to code specifications regarding the use of flashing. The eleven years of testing and inspections of all types of structures conducted by Property Services, Inc further support all of this data.

Why should water penetration be prevented?

Water penetration should be prevented in EIFS systems because EIFS retains excess moisture. That excess moisture sits on the wood substrate and, if undetected, will cause the substrate to rot, the wooden frame of the house to rot, the insulation to rot, major structural beams to rot, and can even damage interior finished walls.

Is the point of water entry visible?

Only if a gap in building materials on the exterior of the home has been left open.

Visual inspection of an EIFS home is not enough to detect moisture damage to the substrate and underlying structure. When water damage in an EIFS home becomes visible, the structure probably has already sustained severe damage.

Should EIFS homes be checked for moisture?

Yes. EIFS homes can be checked for elevated levels of moisture using a combination of invasive and noninvasive moisture meters. An experienced professional familiar with moisture intrusion of EIFS and other cladding systems should be contacted to perform a thorough inspection of your EIFS home.

Is water intrusion a serious problem in newer EIFS homes?

Water intrusion in any EIFS home can be serious.

The most effective repair method for damage to an EIFS home is to strip the affected areas off the substrate, inspect, and replace the damaged substrate and substructure components, and reinstall EIFS. This should be done using a qualified contractor with experience and certification in EIFS systems installation, restoring the system in total to its original intended application. These types of repairs can only be implemented after a full assessment of the building conditions by a design professional. These repair processes address damaged areas, installation errors, and provide the structure with the ability to remain dry even when moisture has previously entered the system or in areas where the system was formerly vulnerable but had not suffered from moisture intrusion. These repair processes take into consideration all of the factors and conditions of the structure. Contrary to the opinion of other experts in the field, merely applying topical step and counter-flashing or sealant to an existing EIFS system will not prevent moisture intrusion, and failure to address the total conditions of the building is irresponsible. Just because the system is not allowing moisture to enter today, does not mean that the system has the ability to prevent moisture entry when affected by different conditions tomorrow. All areas of the building whether moisture has entered or not, should be evaluated and some precautions taken through a repair process to give the system the ability to be relied upon to remain dry. Unlike brick or vinyl, barrier EIFS provides for very little permeation of moisture and no drainage of moisture; therefore, topical solutions are the equivalent of slapping a Band-Aid on a malignant melanoma - it will only grow, and the only ingredient necessary is time.

Should repairs be inspected?

Yes. An experienced professional should inspect EIFS homes every 6 months to ensure moisture levels remain at an acceptable level and that sealant and other components remain intact. It is the responsibility of the EIFS homeowner to ensure proper and timely follow-up inspections are undertaken.

In summary, no homeowners are safe from poor construction practices followed in new home construction. Third party monitoring by trained personnel or experts who understand building cladding and complex systems should conduct inspections during original construction to lessen potential exposure to costly repairs caused by shoddy construction habits that affect all types of homes.