Asbestos is a group of naturally occurring fibrous minerals. It is mined and milled from rock and is thin and strong. Chrysotile (white asbestos), Amosite (brown asbestos), and Crocidolite (blue asbestos), are the most common types of asbestos used in manufacturing. Rarer forms are Tremolite, Anthophyllite, and Actinolite. When viewed under a microscope, Chrysotile fibers are pliable and cylindrical and are often arranged in bundles, whereas Amosite and Chrocidolite fibers appear to look like tiny needles.

What is an Asbestos Containing Material (ACM)?

Asbestos Containing Material (ACM) means any material containing more than one percent asbestos. The typical ACM material found in a residential application is between 1% and 3%. Building materials with less than 1% asbestos are defined as “trace amounts” and are not considered a problem.

Common examples of ACM in a home include but are not limited to: pipe and boiler insulation, sprayed on fireproofing, troweled on acoustical plaster, floor tile and mastic, floor linoleum, transite shingles, roofing materials, plaster, ceiling tiles.

Asbestos was widely used in residential construction beginning in the late 19th century through 1978. In homes built prior to 1978, asbestos is most commonly found as thermal insulation on boilers and pipes. Unfortunately, it can also be found in many other household materials, which include:

In 1989, EPA published the “Asbestos: Manufacture, Importation, Processing, and Distribution in Commerce Prohibitions; Final Rule” (40 CFR Part 763, Subpart I). The rule would have eventually banned about 94 percent of the asbestos used in the US (based on 1985 estimates). However, in 1991, the US Court of Appeals, Fifth Circuit, vacated and remanded the majority of the rule. Currently, the manufacture, importation, processing and distribution of most asbestos-containing products are still legal.

ACMs on ceilings could be applied in various ways. Because this material could be sprayed, or painted on it was a cost effective and quick application that quickly gained favor in the building industry. This application became known as Popcorn Ceilings and is often misunderstood as the only application that was considered an ACM. In actuality textured coatings (paints) were quite popular in residential construction beginning in the 1920s through the 1980s. Generally, the purpose was to create a surface with more visual interest than a plain, bare surface. Appearance was only a part of the benefit of textured ceilings as the use of ACMs provided some soundproofing and, more importantly, fire resistance capability.

The pictures below are two examples of ceilings with ACMs.

The first picture is a textured application 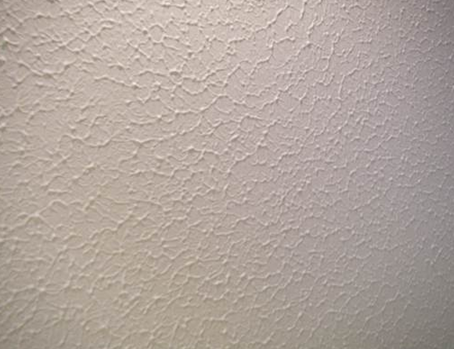 The second picture is a popcorn application 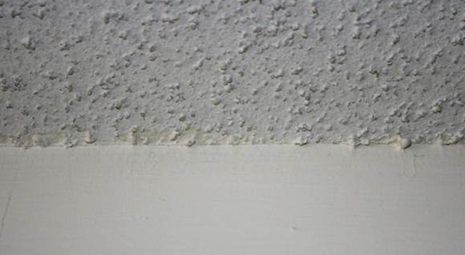 The greatest danger posed by this material is in its original application by the construction workers. Little was known about the adverse effects of ACMs and workers were not equipped with any form of protective clothing or breathing devices. Being continually exposed to ACMs on a daily basis led to health complications that didn’t fully develop until many years later in the form of Mesothelioma.

In researching this topic the EPA, The Center for Disease Control, OSHA and state health departments universally agree that textured or popcorn ceilings in good condition do not pose a health concern. Left alone and managed in place is considered the best practice with the associated health risks being negligible.

If the ACMs are damaged, or in a friable state, it would be necessary to take remedial action. Remediation may be either the removal of the ACMs or encapsulation. An example of encapsulation would be applying another layer of drywall over all of the ACMs. This is both a difficult and costly process with an estimated cost of $1.75 to $4.00 per square foot for the average home. Removal of the ACMs may take two forms, the first of which is the complete removal of the ceiling materials and replacing it with traditional drywall. The other option is to physically remove/scrape the ACM off the surface of the material. Regardless of the option chosen this remediation should only be conducted by licensed professionals.

Our role and Obligations

ERC speaks directly to the subject of asbestos in the reporting guidelines that are found on page two of the ERC Property Assessment Report. Under the heading Unsafe and Hazardous Conditions we are to report suspected visible friable asbestos. This reporting requirement presents a number of challenges for our firm. The first challenge is that home inspectors often will state that the reporting of asbestos is outside the scope of their inspection. When the question of asbestos was posed to the American Society of Home Inspectors they issued the following response-

“An inspector is not required to report the presence of any (emphasis added) possible asbestos containing material. The condition and the location of the material are not relevant. Identification of environmental hazards is a separate discipline beyond the scope of a home inspection. Home inspectors typically are not trained, equipped, or licensed to perform environmental inspections and testing. Also, note that many materials found in a home may contain asbestos. It's unreasonable to expect a home inspector to identify and test all materials that might contain asbestos.”

The International Association of Certified Home Inspectors and the Texas Real Estate Commission (TREC) have a similar opinion on asbestos and states that the inspector is not required to report the existence of environmental hazards, including lead paint, asbestos or toxic drywall.

To further complicate matters there are a few clients who want to know if there are any ACMs in the home, regardless of the location or condition. To address that concern we have added a question to the Property Assessment Report about suspected asbestos in the home. As an extra measure we also scrutinize pictures of the home during the review process looking for ceiling finishes that may be suspected asbestos. If we determine that a ceiling finish may be an ACM we have the obligation and responsibility to include that information in the final report. We will be discussing that observation and decision with the home inspector before the report is finalized.